Kids' Share 2010: Report on Federal Expenditures on Children through 2009 is an annual report that looks comprehensively at long-time and recent trends in federal spending and tax expenditures on children.
Latest Children’s Budget: http://www.childrensbudget.org/
Posted by Lisa at 8:15 AM 1 comment:

Too Many Children Die in America as a Result of Abuse and Neglect. We Can Do Better.

Every Child Matters has released the second edition of  We Can Do Better: Child Abuse and Neglect Deaths in America, a compelling report that explores the crisis of child maltreatment fatalities in the United States.

A weak economy and resulting state budget cuts are putting even more children at risk, leading to a Growing Crisis in Child Protection.

A series of recommendations were previously proposed during the 2009 Summit to End Child Abuse Deaths in America. Included among them is the observation that "Current levels of federal spending are far below the level needed to protect all children at imminent risk of harm."

The National  Coalition to End Child Abuse Deaths has launched a campaign urging Congress and the Administration to:
This Coalition includes the following partners:
More information about the Coalition, including how YOU can advocate to support their efforts is available at: http://everychildmatters.org/resources/reports/child-abuse-and-neglect
Posted by Lisa at 10:10 AM No comments:

Young Lives On Hold: The College Dreams of Undocumented Students 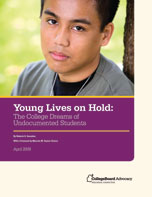 Learn how YOU can make a difference at  http://genwhymovie.com/
Posted by Lisa at 7:51 AM 1 comment:

Number of Youth Aging out of Foster Care Continues to Rise; Increasing 64 percent since 1999