The Florida Project - Loved the Movie, Hated the Ending 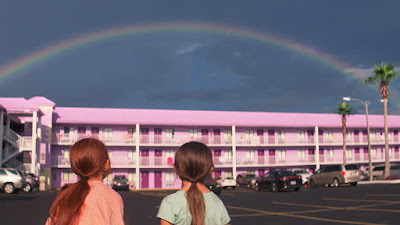 This movie was mesmerizing. It wasn't like watching a movie - it was like walking into the characters' lives, and walking around side by side with them.
The acting was exceptional, including one of the most realistic child actresses I've ever seen. It's amazing that the woman who plays the mom had no prior acting experience.
Quote from one of the reviews about the character of the mother:
Posted by Lisa at 5:57 PM No comments:

Community coming together to help

A local social-services agency is coordinating efforts to help an 11-year-old homeless boy whose extraordinary reading habits and positive outlook drew the attention of Downtown librarians and touched the hearts of Dispatch readers.

A Sunday story about Mackintosh Williams and his mom, Ester Campbell, prompted many to ask how to best assist the family with housing, employment and educational needs. Dozens wrote or called with offers of aid such as cash, more books and rent for a furnished apartment.

“Thank you for highlighting this bright young boy who is wise beyond his years,” one reader said in an email. “Is there a fund set up for him and his mother to help them get back on their feet? If not, what can interested readers do to help them?”

Jewish Family Services staff members met with Campbell this week and will oversee a fund on behalf of her and Mackintosh. He and his mom have been staying in a West Side shelter but spend much of their spare time at the Columbus Metropolitan Library’s main Downtown site, where Mackintosh can feed his passion for science fiction.

Campbell’s struggle to recover from job loss, eviction and homelessness is familiar to too many families in central Ohio and throughout the nation, said June Gutterman, CEO of Jewish Family Services.

“This is the income divide,” she said. “This is the story of our economic world right now.”

Campbell, 32 and a former foster youth, said she’s overwhelmed by the interest and outreach. “I’m really, really appreciative and grateful,” she said. “And I know Mackintosh is as well. Everything’s a blessing.”

She and Mackintosh came to Columbus last month from New York City in hopes of connecting with a family member who had moved to the Midwest. They also had been in the shelter system in New York, where they were moved to a different site every 10 days.

According to the U.S. Department of Housing and Urban Development, more than a quarter of all homeless families with children last year were in the state of New York.

Mackintosh, an “old soul” who loves nothing more than reading and reviewing books, had an especially hard time in the New York City system, Campbell said. “A lot of the kids are rough; they feel like they have to be,” she said. “Mackintosh is not like that.”

She and Mackintosh like Columbus and want to stay. She’s interviewing for jobs and hopes to find an apartment soon.

“The homeless epidemic is so bad,” Campbell said. “It’s so humbling that people here haven’t forgotten the forgotten.”

Mackintosh on the cover of the Dispatch 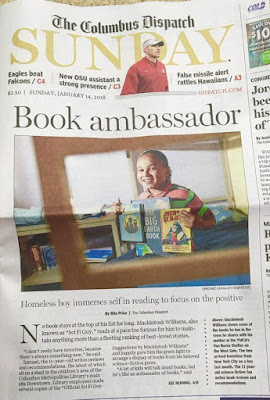 Book Ambassador
Homeless boy immerses self in reading to focus on the positive
Price, Rita. The Columbus Dispatch, Jan. 13, 2018

No book stays at the top of his list for long. Mackintosh Williams, also known as “Sci Fi Guy,” reads at a pace too furious for him to maintain anything more than a fleeting ranking of best-loved stories.

“I don’t really have favorites, because there’s always something new,” he said.

Instead, the 11-year-old writes reviews and recommendations, the latest of which sit on a shelf in the children’s area of the Columbus Metropolitan Library’s main site Downtown. Library employees made several copies of the “Official Sci Fi Guy Suggestions by Mackintosh Williams” and happily gave him the green light to arrange a display of books from his beloved science-fiction genre.

“A lot of kids will talk about books, but he’s like an ambassador of books,” said children’s librarian Lisa Dickson. “When he came in here, he just knocked my socks off. He’s incredibly intelligent.”

Mackintosh moves about the big library with purpose and ease, like a kid who really, really wants to be there. He loves the space and the light and the computers. But he can’t stand the pain that crosses his mother’s face whenever they talk about the other reason for coming so often.

When people are homeless,” Mackintosh said, “they feel over-pressured.”

In his mom, he sees a daily battle to keep faith and determination from being swamped by frustration and sadness. In some of the other kids at the homeless shelter, he sees misdirected anger and outbursts, like the other day when a handful of boys pelted him with wads of wet paper.

“I try to avoid problems, but it’s like problems are running after me,” Mackintosh said.

They have a harder time catching him when he reads. Mackintosh immerses himself in tales of robot armies and alien hordes, golden capes and galactic hot dogs. He checks out stacks of books at a time and stows them carefully in the spare, windowless room he and his mom share at the YMCA Van Buren Center, a large shelter on the West Side with separate areas for men, women and families with children.

Sixty-eight families, including 130 children, were living in the shelter — one of two family shelters in the city — as of Wednesday.

“This is one moment in time,” Shameikia Smith, a senior director at Van Buren, said she wants the kids to believe. “This is not your whole life. This is a chapter.”

Mackintosh does his best to keep up hope. In the meantime, he turns to other narratives.

“When you’re reading a book, no one knows where you live,” Dickson said. “You live in that story.”


Seeking a new star
Ester Campbell, Mackintosh’s mom, has known hardship much of her life. “My dad was addicted to drugs, and my mom passed away,” she said. “I grew up in the system. But I still wanted to instill the proper values in Mackintosh. I knew he wasn’t your average child.”

Mackintosh walked early, talked early and barely had to be taught to read. He seemed to quickly grasp the difference between right and wrong, and relished taking a stand. “He has a moral compass,” said Campbell, 32. “The fact that he wants for others what he wants for himself makes him a beautiful person. Adults can learn from children.”

She and Mackintosh came to Columbus from New York City, where she had again fallen into homelessness, this time after losing a security job and failing in attempts to halt an eviction. Although she found more work in New York, the pay wasn’t great. Campbell felt exhausted by fruitless searches for an affordable place of their own. The chaos of temporary housing — first in a motel, then the shelter system — seemed never to give way.

“They put us someplace different every 10 days,” Campbell said.

She and Mackintosh packed up and boarded a bus to central Ohio last month in hopes of finding and reconnecting with an estranged sister who also had moved to the area. That hasn’t proved easy, and in any event, “our short-term goal has to be for us to get out of the shelter and for him to go to a great school,” Campbell said. “He’s so bright.”

Campbell enrolled Mackintosh in an elementary on the West Side, but she pulled him out and decided to look for a different school after he said he was severely bullied.

“It was just unbelievable, all the problems,” Mackintosh said. “Another child hit me in my mouth and pushed some of my teeth back. People like violence, I guess, but violence should never be the choice.”

Overwhelmed as they are, Campbell and Mackintosh say they draw strength from their faith. Campbell’s birth mother was Jewish. “And I always wanted to feel closer to her,” she said. “So I began to embrace the Torah.”

Surrendering to despair isn’t an option. “Sometimes I just want to go into a corner and ball up and cry and scream,” Campbell said. “But you can’t afford to be weak, because your child is looking at you.”

Finding ways to laugh
As Laurie MacGillivray conducted research at family homeless shelters in Los Angeles and Memphis, she marveled at families who, while seemingly everything around them had fallen apart, managed to maintain or develop good literacy habits.

“When mothers and children were looking for ways to normalize their lives, reading was a good way to do it,” said MacGillivray, a literacy expert and professor at the University of Memphis. “Reading lends stability. It also can be a way to create privacy, because often, if you’re living in a shelter, you don’t have much.”

And reading can help homeless children — for whom so many typical activities and possessions are beyond reach — level a field. “There’s no one saying, ‘Oh, you can’t read this book because you’re homeless,’” MacGillivray said.

A kid such as Mackintosh might be exceptional, but he’s not unique in his desire to hone an interest that is his no matter what. “Every time a homeless child goes into a new school or a new environment — and I know kids who change schools more than four times a year — they have to redefine themselves,” MacGillivray said. “If he already has his area of expertise, he’s ahead of the game.”

Over a year, more than 250,000 children in the United States will have stayed at a homeless shelter, according to the National Alliance to End Homelessness. Nearly 2,500 children were served in Columbus homeless shelters during the most-recent fiscal year.

Even those who fare well wind up with scars.

“The fact is, by the time a family has experienced homelessness, they have faced some devastating consequences,” said Michelle Heritage, executive director of the Community Shelter Board. “We should say, as a country and a community, that no child should be homeless. Period.”

Resilient as they are, kids often succeed in finding ways to laugh and play and learn outside their worst experiences. Mackintosh isn’t terribly daunted. He doesn’t complain about having to watch shows on his mom’s phone instead of a television, or pine for a real piano, or pout when Campbell has to say that, yes, $12 is too much for them to spend on a notebook.

He knows she doesn’t like to deny him things. “I want you to be on the news,” Mackintosh said suddenly, “as the most-beautiful woman in the world!”

Campbell playfully shoos him along. Mackintosh zooms toward the middle of the children’s area, where he scopes a few books before sitting at a computer station. In addition to writing his book reviews, he’s been working on creating a game.

“The angels come at the end,” he said. “They help you and heal you.”