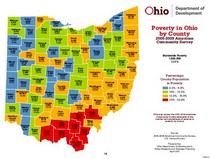 The Ohio Department of Development has released their 2011 Ohio Poverty Report which notes that approximately 1.7 million Ohioans, or about 15 percent of Ohio's population, are categorized as poor.

Another resource to be aware of is 2011 State of Poverty in Ohio series, published by the Ohio Association of Community Action Agencies and prepared by Community Research Partners.
Posted by Lisa at 1:23 PM No comments: