Doctors Without Borders and Plumpy'nut 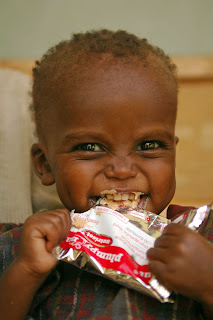 Millions of children worldwide die preventable deaths each year because their growing bodies aren’t getting the nutrition that they need.

In Niger, for example, the United Nations reports that 150,000 children under five years old are severely malnourished.

Their mothers are unable to produce enough breast milk, due to poor nutrition. Families cannot afford to buy milk and have no way to store milk, due to lack of refrigeration. Powered milk is useless without clean water.

According to Dr. Milton Tectonidis, the chief nutritionist for Doctors Without Borders, "If you feed (children) well until they're two or three years old, it's won. They're healthy, they can get a healthy life. If you miss that window, it's finished."


So what’s the solution? 60 Minutes reports that Plumpy’nut has produced rapid growth in severely malnourished children.

Plumpy’nut is made of peanut butter and powered milk, and enriched with vitamins and minerals. Each serving is the equivalent of a glass of milk and a multivitamin.

Top 10 Reasons To Use Plumpy’nut to Address Child Malnutrition:
1.) Plumpy'nut is a ready-to-use therapeutic food, requiring no refrigeration or preparation.

2.) It is stored in sealed packets to avoid bacterial contamination, and has a two-year shelf life when unopened.

3.) Families are able to take a week's ration home and return the following week for a weight check.

5.) The sweet taste of Plumpy'nut appeals to children, even children who have become anorexic and "lost their appetite" due to vitamin deficiencies.

6.) Peanuts are a good source of vitamin E, a powerful antioxidant that helps to convert food into energy -- and peanut allergies are rare in underdeveloped countries.

7.) The high calorie content makes it possible for children to receive a sufficient amount of energy, despite their shrunken stomachs.

8.) Results are generally seen within two to four weeks.

9.) Plumpy'nut is inexpensive to produce and deliver; a daily dose costs only $1

10.) If more countries are willing to spend part of their food aid on Plumpy'nut, more companies will start making it.

To Learn More About How You Can Help: Please visit:
International Medical Corps
Project Peanut Butter
Posted by Lisa at 4:35 PM 4 comments:

Graph from Maia Szalavitz's article about "The Cult That Spawned the Tough-Love Teen Industry," August 20, 2007.

H.R. 5876 is the first piece of federal legislation seeking to regulate and monitor abusive treatment within teen behavior modification programs in the United States.

However, the treatment that they provide often violates the rights of young people.

Disciplinary measures can include physical or mental abuse, physical restraints and withholding food, water, clothing, shelter or medical care, as a form of punishment. As a result, some teenagers die in these camps, while others emerge with physical and emotional scars.

Jesus Land by Julia Scheeres documents the abuse that she and her adopted brother experienced in a fundamentalist Dominican Republic reform school. Other survivors have been courageous enough to share their experiences in an effort to inspire reform.

The time has come for these programs to be held accountable, and subject to regulation, oversight and standards.

This bill would:
- Prohibit programs from physically, mentally or sexually abusing youth in their care
- Prohibit the denial of essential water, food, clothing, shelter or medical care
- Require that programs physically restrain children only if it is necessary for their safety or the safety of others, and to do so in a way that is consistent with existing federal law on the use of restraints
- Hold the programs accountable by requiring unannounced site inspections at least every two years and imposing civil penalties for up to $50,000 for violations of the law
- Enable parents to file civil action suits if national standards are violated and their child is abused and harmed.

In addition:
- Programs would be required to disclose the qualifications, roles and responsibilities of all staff members
- Staff members would be trained in what constitutes child abuse and how to report it
- Emergency medical care must be made available on-site

This bill is supported by: the Community Alliance for the Ethical Treatment of Youth and the National Youth Rights Association.

H.R. 5876 has passed committee and will be voted on by the full House of Representatives later this month...
Posted by Lisa at 6:19 AM 7 comments:

A model for Youth-Centered Permanency 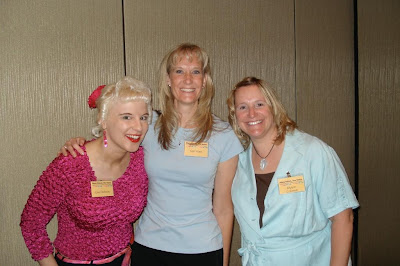 One of my favorite workshops during the Many Voices, One Vision conference was "Youth-Centered Permanency," led by Allyson Coldwell and Kerri Klein.

Allyson and Kerri tackle "cold cases" in which a child has been languishing in foster care for years.

This young person is usually between the ages of 12- 16 years old.

They put on their detective hats and work with that young person to chart all the caring adults in his or her life. The list they generate from his or her answers might include neighbors, distant relatives, teachers, coaches, staff members from previous group homes or residential facilities, etc.

During the actual meeting, each adult in attendance has the opportunity to make a firm commitment to the young person. This commitment might range from holiday cards, to weekly phone calls, to monthly visits - or even adoption!

I wish this had been done for me during my time in foster care.

Every time I changed placements, I lost contact with every caring adult that I had built a relationship with... Those adults were either forbidden to contact me, discouraged from contacting me, or just didn't have any contact information to stay in touch with me afterwards!

Allyson and Kerri's method struck me as creative, innovative and having powerful potential to increase the circle of support in a young person's life.
Posted by Lisa at 2:36 PM 1 comment: