Things That Weigh Heavy on My Heart 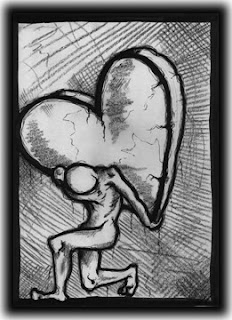 These are the things that weigh heavily on my heart as I ponder how we might address them.

Ohio is in serious economic trouble right now. Our state unemployment compensation funds have been completely depleted. Ohio is one of 17 states that are now borrowing from the national trust fund to cover unemployment benefits. We are currently $1 billion in debt, and the shortfall is expected to top $3 billion by the end of 2010.

One of our counties is in a fiscal emergency: Auditor of State Mary Taylor recently placed Scioto County in fiscal emergency -- the first Ohio county ever so designated. She said the county has a combined county fund deficit of more than $3.5 million as of June 30, 2009.

Did you know that, according to CBS News, child abuse spikes during a recession?

Liquor sales are up: The Ohio Department of Commerce said Wednesday that sales of liquor continued to set records, rising to $729.9 million for FY09. When times are tough, it can seem easier to add up change to buy liquor than to face the pain, and try to be a part of a positive solution.

Have you visited the website for the National Center on Substance Abuse and Child Welfare? That organization exists because there is a strong correlation between substance abuse and the neglect and abuse of children.

Gambling is being promoted by our Governor as some sort of magic elixir to fix the budget problems. And it seems that Ohio’s children are last on his list.

At a time when the needs of foster care youth transitioning to adulthood are being recognized on federal level through the Fostering Connections to Success and Increasing Adoptions Act, Governor Strickland chose to cut the Ohio’s state independent living allocation by 100%.

This was after Ohio foster care youth, alumni and allies successfully advocated to retain that funding allocation. Can you imagine how difficult it was to look into the faces of the young people who testified and tell them about the Governor's veto?

Now, unless Ohio complies with National Youth in Transition Database requirements, our state stands to lose up to $250,000/yr. in federal funding to help transitioning youth as well. That is $250K of Chafee funding that could be spent supporting foster care youth before, during and after transition to adulthood.

All this, in addition to massive cuts regarding child protection, which have led to laying off caseworkers and increasing caseloads.

I am deeply concerned.

But I also believe that the tougher things get in our state, so far as foster care and adoption advocacy is concerned, the more important it is for us to band together and press forward. We can't give up -- because there is too much at stake. And we need to formulate a shared vision of how we can make things better.

There’s a team-building exercise in which each person uses one finger to lift something (like a table), and their combined strength makes it possible to lift that table off the ground.

I can’t lift the weight that’s on my heart all by myself.

It’s the weight of a state, and all of us who care about Ohio youth and their welfare need to come together and take collective action.
Posted by Lisa at 12:15 PM 2 comments: 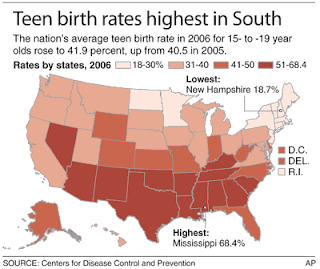 This is from 2006, so if you want to know where your state stands today, please visit: Estimated Percentage of Females Who Will Become Teen Mothers: Differences Across States.

While I am not a teen parent myself, I could have been. That is to say that I had a miscarriage when I was 15 years old. If I had not had that miscarriage, I'm not sure what would have happened.

What I do know is that any efforts to address the needs of a community can be made more powerful if they include consumer voice and firsthand experience.

If I were a pregnant teen, I'd be more likely to listen to someone who had been through the experience, and made it, and was a successful parent.

That's who I think needs to be co-presenting and co-developing the workshops.

You need the voice of experience, combined with the wisdom of research and connection with all available resources... There are all sorts of resources out there, if someone wanted to step into a leadership role and take this on:

1.) Chapin Hall recently released a report on Pregnant and Parenting Foster Youth: Their Needs; Their Experiences.

2.) Healthy Teen Network hosts an annual conference. I've suggested to them in the past the possibility of waiving conference and travel fees for former-teen-moms-now-workshop-instructors who might want to present.

3.) The National Campaign to Prevent Teen and Unplanned Pregnancy even invites teens to make their own commercials about early parenthood.

4.) The National Crittenton Foundation recently released "Rights and Resources," developed with and for pregnant and parenting teens in foster care. It provides state-specific information.

5.) The Department of Labor provides a Youth Persons Demonstration Grant to support community organizations that train and educate young parents to help them achieve economic self-sufficiency. This grant targets high-risk young mothers and fathers and expectant mothers ages 16-24, and is open to nonprofit and faith-based groups.

In terms of measuring and maximizing effectiveness, Child Trends released a fact sheet on What Works for Adolescent Reproductive Health.

One example of an innovative program is Family Scholar House in Louisville, Kentucky. They give single-parents the support they need to finish a four-year college degree.
Posted by Lisa at 7:36 AM No comments:

Early emancipation of foster teens as a cost-saving measure??

I recently received reports from social workers that some counties are trying to cut costs through premature emancipation of Ohio teenagers.

Just yesterday, I presented a workshop on Strategic Sharing for homeless youth during a statewide retreat - and over half of the youth in attendance had been in foster care.

I've been contacted by young people in Cuyahoga County saying that their case had been "terminated" prematurely since the budget cuts were announced, and that the reason they were given was noncompliance with their case plan.

At a time when our nation is moving forward in terms of federal matching dollars for extending foster care to age 21, and making measuring outcomes of youth "aging out" of foster care a federal priority, Ohio seems to be moving backward and not forward in this area.

Ohio foster youth are entering into adulthood during a recession. Any decision to close their case should be made based upon their readiness to face that world - not based on cost savings for the agency, or convenience in not having to deal with that particular teenager.
Posted by Lisa at 12:49 PM No comments:

"Myriad studies have shown that the period immediately after “emancipation” at age 18 is the most precarious for a foster youth...

"For years, thousands of California youths were abused or neglected twice over — first by parents who couldn’t or wouldn’t provide basic care, then by governmental agencies that cut them off from all support on their 18th birthdays...

"Any pressure to divert savings to help with the state’s budget woes instead of reinvesting in foster care. That would be a costly mistake.

"The human and the dollar cost of not investing in grown-up foster children has already been shown to be very, very high.

"It is time for us, as a state, to act as if these kids who have been put in our care genuinely matter to us.

Source: http://witnessla.com/category/foster-care/
Posted by Lisa at 12:34 PM No comments:

The Chafee National Youth in Transition Database (NYTD), effective as of April 28, 2008, added new regulations to require states to collect and report data to the ACF on youth who are receiving independent living services, including data collection and tracking outcomes.

The Purpose of NYTD: To understand and serve youth better.

Basically, every state is now required by federal law to track foster care youth at ages 17, 19 and 21.

Why WE should ask our states what they are doing and offer to help:
- Requiring states to be more accountable is good
- Tracking youth after they leave foster care is HARD
- If states DON'T meet this requirement, they will lose money - money that COULD have been spent to help transitioning foster care youth

Penalty for Noncompliance: States are required to get at least 80 % of youth in foster care and at least 60 % of youth who have left care to participate in the youth outcomes survey. If States do not comply with or meet the data standards, they can be penalized between one and five percent of their annual Chafee Foster Care Independence Program allotment.

Loss of up to 5% of Ohio's Chafee funds would translate into a loss of $250K of federal funding each year. This is federal funding that COULD have been used to help transitioning foster care youth.

Recently, Ohio's foster care youth lost a 2.5 M state earmark for Independent Living, after successfully advocating for this funding through the Ohio House, Senate and conference committee, due to Governor Strickland's last-minute veto.

Ohio’s foster care youth cannot afford to lose $250,000+ in Chafee funding in addition to the loss of state funds. This is why the Ohio chapter of Foster Care Alumni of America is offering to help in our state with this effort...

Consider this: Who is more likely to be successful in keeping in touch with a young person who has aged out of foster care? A social worker? Or a foster care alumna?

For more information, please visit: http://www.nrcys.ou.edu/yd/nytd2.html
Posted by Lisa at 1:31 PM No comments: