Statewide Independent Living Summit -- the first of many more to come! 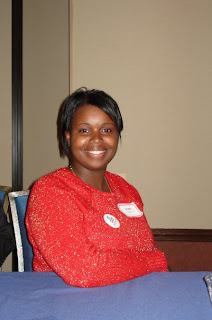 Yesterday was my state's first statewide independent living summit...
Arlene Jones (pictured on the left) shared her experiences and insights during the afternoon closing session.
Members of the the statewide chapter of Foster Care Alumni of America served on the conference planning committee and presented at the conference.
With the support of and collaboration with our allies, OACCA, OFCA, Lighthouse Youth Services, PCSAO and the statewide youth advisory board, Overcoming Hurdles in Ohio, we are already planning ahead for the independent living conference next year!

Next year, we would like for the independent living summit to be:
- Free (vs. reimbursed afterwards)
- Invite 600 attendees (vs. approx. 200 this year)
- Have the conference last for two days (vs. just one day this year)

Due to the time constraints of limiting the conference to one day, this two-hour workshop was two-parts. I led the first part of both the morning and afternoon session. My topic was long-term emotional health and building relationships after experiencing foster care.

So many times, the focus is on placement. But, wherever young people wind up, foster care, group homes, kinship care or reunified with their biological parents, they still need to be equipped to cope with their experiences and the emotional aftermath.

For a sneak peek at some of the information I covered in my presentation, please feel free to visit my Fostering Attachment blog.

The second half of the workshop was led by Cece Norwood of Nirvana Now.
Cece did not experience the foster care system personally, but she experienced sexual abuse first-hand.

Cece Norwood has a Masters degree in Counseling and is extremely knowledgeable about the foster care system. She counseled for years, but now serves primarily as a life coach, since wants to help people develop and implement a plan for their lives rather than counseling them indefinitely.

What I liked most about Cece was her ability to recognize and celebrate participants' survival skills and their strengths.

I wish you could have been there to hear her speak, and hear her responses to young people -- male and female youth who poured their hearts out, sometimes in tears -- about the sexual abuse that had scarred their lives...

We presented the same workshop twice. The morning workshop was mostly professionals; the afternoon one was mostly youth.

The afternoon workshop was "standing room only." Every seat was filled and we had to bring in eight chairs, and still there were people standing the hallway, listening....

In the future, I look forward to more opportunities to share the message of building relationships after aging out of foster care on a national level. I also believe that Cece Norwood has valuable insights to offer to foster care alumni who have experienced sexual abuse throughout the nation.

- Riding A Bicycle on the Ice: Youth With Mental Health Needs In-Transition: Workshop by Beech Brook and Greater Cincinnati Behavioral Health
Posted by Lisa at 11:09 AM 3 comments:

Four workshop activities at the fifth annual It's My Life conference 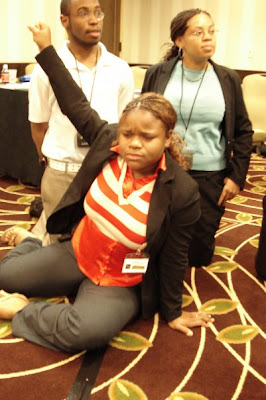 
The Ohio chapter of FCAA, Amanda Dunlap, Amanda Keller and I, were lucky because we presented our workshop, Overcoming Trauma and Achieving Intimacy, during the first session.

This meant that after our presentation was over, we were able to enjoy all the other wonderful workshops that IML had to offer!

Here are some workshop activities that I was very impressed by:

This activity shared portions of a play by Kamika Whetstone.

The actors (all foster care youth and alumni) acted out various roles of young people going through struggles, and adults in their lives who were either helping, harming or just observing them.

In the middle, they stopped -- and, let's face it, the play was so fabulous that I didn't want them to stop -- and broke the audience down into groups. One of the actors facilitated each group, as we tried to figure out what would happen to that character next.

What decisions would he or she make? Would this person survive? Thrive?

Then, they acted out the end of the play, and we were able to see if our guesses were right or not!

In this workshop, we were introduced to:
- the background of the juvenile justice system
- the high rate of foster care youth and alums who get involved in it
- some of the reasons why young people might end up in the system

Among those reasons is the fact that some group home staff or foster parents over-rely on law enforcement in order to deal with normal adolescent behavior.

Young people who transfer from the foster care system to the juvenile justice system risk losing some of their educational funding and other benefits, depending on which state they are in...

After the preliminary discussion, we broke down into groups to play this powerful board game:

- Each member of the group had a role: foster care youth, group home staff, social worker and CASA.

- The rules were: The foster kid could not talk or roll the dice. Everyone else took turns rolling for them and moving their one token across the board. We could land on things like: "ran away," "got into a fight," or "disrupted adoption."

If we landed on a "Decision Point," then we all had to guess what what going on, and try to come up with the best placement decision -- but without any input from the foster child, because that person wasn't allowed to talk.

- At the end: The person who acted as the foster child was finally able to speak. She read from a piece of paper explaining all the reason behind her behavior.
Every one of our assumptions about the "why" of her behavior turned out to be wrong!

This game is a powerful teaching tool that should be played at least once by all professionals in a foster child's life, in order to remind them about how impossible it is to make the right placement decisions for a child without his or her input.

The initial activity was to break people down into groups and give them puzzle pieces. But, each group soon realized that it would be impossible to complete the activity successfully, because the puzzle pieces didn't match the box -- or each other.

This was an effective way to demonstrate the difficulty that is sometimes experienced in reuniting with birth families after aging out of foster care.

One presenter shared that when she was in college, her bio-mom found out about the stipend and grants that she was receiving and started relying on her daughter to financially support her.

Finally, she had to say NO to her mom, and learn how to take care of herself. This was a painful decision for her, and she was brought to tears as she shared.

4.) Navigate Your Own Success As An Advocate

This workshop also relied on creative dramatics as a way to keep the audience engaged and get the audience involved.

The workshop leaders role-played both negative and positive "self-talk" by having one person lie down, and others surround her, speaking to her in voices of either encouragement or discouragement.

In the second scenario, the social worker came better prepared, and the young person expressed the same concerns but in a nicer and more proactive way:

"This is what I want from you. This is what I need from you. You are my sixth social worker in ___ months, so it is hard for me to trust that you will live up to your promises, but for now I will give you the benefit of the doubt."

Then, two people from the audience came up. One person shared that, in real life, she had just been placed in a brand-new foster home, and neither she nor her new foster mom knew what the expectations were.

The other, a young man, was assigned the role of "foster dad" and the two of them negotiated the expectations together:

All four of these workshops were creative and memorable.
Posted by Lisa at 5:29 AM No comments: 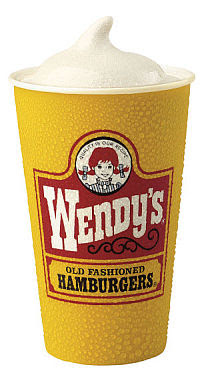 During the month of October, Wendy's will be selling Trick or Treat Gift Books as part of an annual fundraising effort to support the Wendy's Wonderful Kids program, via the Dave Thomas Foundation for Adoption.

For just a dollar, each Wendy's Gift Book contains coupons for ten Junior Frosty's ($8.90 value). That's less than nine cents per coupon, which makes this a good deal for you -- and an opportunity to help some of the 513,000 children who are waiting for families within the United States foster care system.

One example of how funds are spent:
The North Carolina Children's Home Society received two Wendy's Wonderful Kids grants this year, each funding a staff position focused on finding permanent families for an identified group of children awaiting adoption.

As a result, 15 children were linked with adoptive homes.
Posted by Lisa at 1:02 PM No comments:

Circle of Influence vs. Circle of Concern 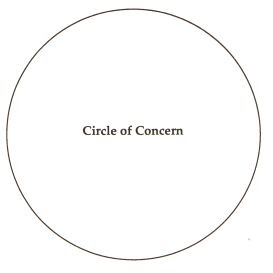 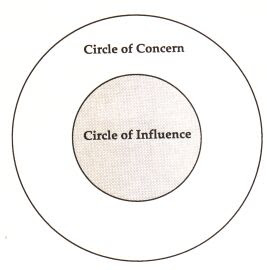 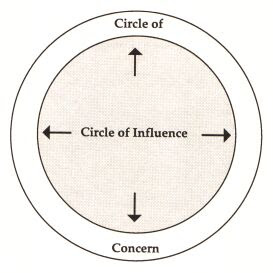 I've always been a "save the world" kind of person.

As a child, from the first time I learned about history, all I could think of was the atrocities that had occurred, such as slavery, the Holocaust, poor treatment of Native Americans, etc. and how much I wished I could have been there to fight the evil and make a positive difference.

As an adult, I have focused my passions on one area: foster care. This seems to be the area wherein I can make the most impact, and for which my personal and professional experiences have prepared me.

Yet, even when narrowing your focus to just the foster care arena, it can be easy to become overwhelmed. A very dear friend of mine was brought to tears during the It's My Life conference, because she heard so many stories of pain in a row...

The best help that I have ever received in this area is from the book: The Seven Habits of Highly Effective People by Stephen Covey. In this book, he talks about your "circle of influence" and "circle of concern."

Just speaking for me personally, my circle of concern is HUGE. I care about every person in and from foster care... and that is one big circle!

But, the secret is to be faithful within your circle of influence. Do the very best job you can with every opportunity that is offered you to make a positive difference in the child welfare system, and two things will happen:

1.) Your efforts will make a positive ripple effect that affects the larger circle

2.) Your circle of influence will widen

That's definitely what has happened with me.

My involvement in Foster Care Alumni of America has literally changed my life, because we represent a collective voice and collective effort. We are a national organization that is constantly changing, growing and making additional connections.

And I love being a part of this movement!
Posted by Lisa at 7:47 AM 5 comments: