Rewriting the scripts in a child's life

What the movie Martian Child teaches about trauma and food hoarding

Boy in a Box: What the movie Martian Child teaches about responding to child trauma

My So-Called Emancipation: From Foster Care to Homelessness for California Youth 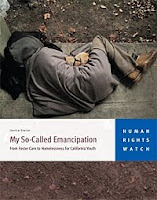 Human Rights Watch has released a new report about California youth in foster care with some startling results: At least 20 percent of the 4,000 who are released from foster care each year end up homeless.

Through interviews with 63 young people who became homeless after leaving foster care, it was evident that factors leading to homelessness include "missed opportunities to learn skills, lack of ability to support themselves, a shortage of second chances, and the fact that no one cared what happened to them."
Posted by Lisa at 9:49 AM 1 comment:

We Can Do Better: Child Abuse and Neglect Deaths in the U.S.

Every Child Matters released a 2009 report titled We Can Do Better: Child Abuse and Neglect Deaths in America which predicted that abuse and neglect deaths of U.S. children would continue to increase unless the federal government made the issue a priority.

To sign a petition asking Congress to hold a hearing on child abuse related deaths, please visit Homeland Insecurity: Why new investments in children and youth must be a priority for the Obama Administration and the 111th Congress.
Posted by Lisa at 12:38 PM No comments: