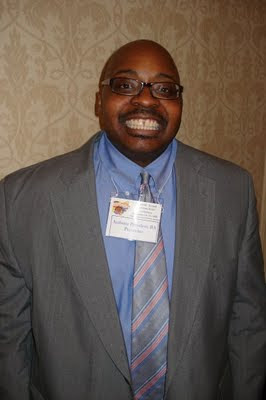 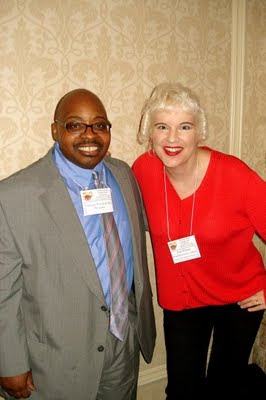 Anthony President is a Cuyahoga County trainer through the Ohio Child Welfare Training Program, who works for Lakeland Community College.
His workshop, Filtering the Noise for Young Black Boys, is based upon Anthony's concern is that Generation Y is being influenced by negative street culture, not just in the United States, but spilling out all over the world...
NOISE:
Boys are particularly negatively influenced by “noise;” negative imagery that glorifies “hood culture.” This noise can skew their perception, and impede positive messages, from parents, educators and pastors, from being heeded.
As William Isaac Thomas wrote, "How we define a situation influences how we respond to it."

Boys can be indoctrinated to believe that gang life is their only way to survive, that there is no other reality.

Young men are especially vulnerable to street culture if they have no hope, no vision, no plan for the future, no positive peers, no positive encouragement, and no positive role models.

SOURCES OF NOISE:
1. Parents: Role-play is very important to boys. They often receive their first lessons in the definition of manhood from family members. In some families, young men are being groomed to become hustlers.

2. Peers: Anthony discussed the gang recruitment process, and the evolution of posers into gang members.

3. Media: Generation Y is the most technically savvy generation. TV has replaced parents as the #1 storytellers. Videogames and music videos demonstrate the elevation of the anti-hero. And, on YouTube, just by checking a box that says they are over 18, young children can watch “mature” material.

4. Relatives, Neighbors, Surroundings: These influences can further paint a thug picture of reality.

Six ISMs:
1. THUGISM: The word “thug” comes from India, and refers to “gleeful killers.” The Thug Manifesto is based on anger towards mainstream society for exploiting poor people. Frustration has led to anger, which has led to hate.

The thug life is not a long-term lifestyle. Participants typically wind up broke, dead or in jail. This is why gang leaders are constantly seeking new recruits. Some children as young as eight years old are already trying to emulate older gang members.

2. GANGSTERISM: Gang culture has become a part of Americana. Former gang members write best-selling books, appear on talk shows and episodes of Law and Order. Gangsterism is a divisive ideology: one gang against the other.
Why might young people join gangs? Power, money and respect. Sense of identity and belonging. Escape from boredom. Desire for sex. Quest for safety. If a young person disobeys the gang's bylaws, two consequences are BOS (beat on sight) or TOS (terminate on sight).
3. PIMPISM: Ideology based on manipulation as a means of survival. Often involves the objectification and exploitation of women. The three Ps (p*****, pay and a place to stay).

4. HOODISM: Based on the idea that "this hood is all I have" and if any strangers trespass in the neighborhood, the proper response is to beat them up or kill them. This ideology is currently being challenged in the Give Me A Pass Campaign.

6. SEXISM: Music can permeate our natural defense mechanisms. Listen to how women are portrayed on music videos and referred to in lyrics. What language is being used to describe women? Does it value women? Language precedes thought, and influences behavior and interpretation of social reality.

Anthony showed an excerpt from a documentary called War Zone. The young men in the video were trying to enact their personal fantasies, based on music videos, on real-life women. He also shared how Kazi and the Hip Hop Project channel music and abilities in a positive direction.

7. KEEP IT REALISM: This socially constructed definition of masculinity is rooted in white Italian gangster films like The Godfather. It is a narrow and destructive method of training boys to become men, which includes fronting to get respect, and mastering a tough guy pose: “You gotta look mean, or people won’t respect you.”
Masculinity is perceived as being based upon performance. Uncles tell their nephews to never back down from a fight. Crowds cheer on fights, and participants feel that they can’t back down, or they will lose face. Anthony asks, "Is there all there is to being a man? What about pride in being a protector or a provider?"
FILTER: When Anthony was a young man, growing up in Cleveland, the people around him helped him to develop an internal filter to screen out the noise (pervasive messages) of mass media and society. He learned that, if he used education as a vehicle, there was another reality in which he could exist.

To address street culture, we need to:
- Be as pervasive as the negative messages
- Equip young people with the tools to resist negative, pervasive messages
- Replace the language of the street (“Whassup, pimp?”) with the language of empowerment
- Provide young people with the resources they need to succeed, including the development of problem-solving activities
- Use the power of stories (success stories and/or cautionary tales)

It's vital for the adults in young men’s lives to teach them how to invest in education and skill set development that will lead to increased financial rewards throughout a lifetime (vs. dying young).

Action Plan: Reach out to the teenagers in your life. Find something to praise in their behavior. Ask them about their goals for the future. Encourage them to put them in writing, sign and date them. Check back with the teens to see whether or not their goals are being met.

Redirect if necessary: One young man told Anthony that his goal was to get a girl pregnant, so she could get Section 8 and WIC, and he could live with her. Anthony and the young man listed the pro's and con's of this idea.

Anthony then said, "That can be one reality. What about this one? You get a two-year post-graduate degree and wind up with a well-paying job. You wait to marry the right girl, the one you love. She also has achieved a degree. Which one of these options has a better pay-off, in terms of your future?"
Posted by Lisa at 7:54 AM 2 comments:

What's the easiest transition between youth and adult systems? 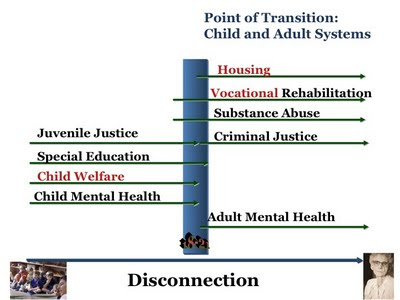 Check out the DSHS Children's Administration Ongoing Training site!
Posted by Lisa at 10:48 AM No comments: 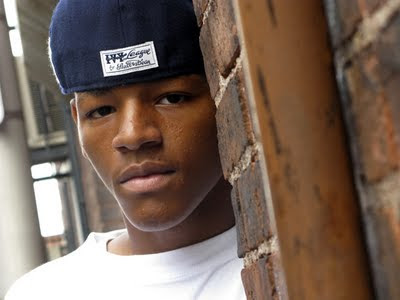 Young adults ages 19 to 29 are among the largest and fastest growing segment of the population without health insurance.
Posted by Lisa at 12:38 PM 1 comment:

Economic crisis is unraveling social safety nets across the nation

The National Council of Nonprofits recently released a report titled: A Respectful Warning Call to Our Partners in Government: The Economic Crisis Is Unraveling the Social Safety Net Faster Than Most Realize.

The report indicates that nonprofit organizations throughout the nation are struggling to meet growing demand for services at the same time that their operating costs are rising and their revenues falling.

Tim Delaney, President and CEO of the National Council of Nonprofits explains that, "The economic threats to nonprofits and the communities we serve are real and dire. It is both unrealistic and unsafe to those depending on services to simply assume that nonprofits will somehow be able to continue to deliver more services that cost more with declining revenues. The math just doesn't work."
This report encapsulates data from GuideStar, the Listening Post Project at Johns Hopkins University, the Bridgespan Group, and the Nonprofit Finance Fund, as well as state non-profit associations in Arizona, Colorado, Connecticut, Idaho, Illinois, Louisiana, Michigan, Minnesota, and New Jersey.

Rather than asking for additional funding from the federal and state governments, the report calls on government officials and nonprofit leaders to collaborate more effectively to meet growing community needs.
Posted by Lisa at 5:11 PM No comments: